How I Got My Literary Agent 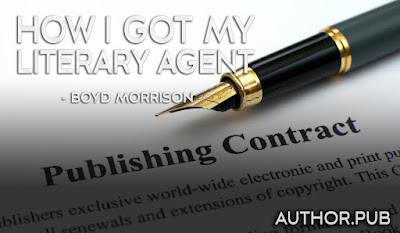 It’s been 13 years since I finished writing my first novel. Three weeks ago, I got my first US publishing deal, and my debut thriller novel, The Ark, will be released in 12 different foreign markets and counting. So every writer who talks about persistence being a defining trait of published authors is absolutely correct. Listen to them. Keep writing. Don’t stop at that first novel. Don’t rewrite it over and over. Move on. You’ll improve your chances a hundredfold by writing that next book.

I started writing my first novel, The Adamas Blueprint, while I was finishing my PhD dissertation. Why I thought I could do both at the same time, I have no idea. It took a year to finish the book, and in 1996 I queried four literary agents. Yes, only four. Out of those four, one of them asked to read a partial manuscript and gave me some positive feedback but ultimately decided not to represent me.

One out of four was a stellar percentage, but I didn’t realize it at the time, and I stopped submitting it.  My wife thought I gave up too easily, and she was absolutely right (I listen to her much better now).

At the time, she was just starting her pre-med courses in anticipation of applying to med school. It meant that I would be supporting her during her training, so I put my writing on hold to concentrate on work. Yes, I could have done both at the same time, but my job consisted of sitting at the computer for at least eight hours a day, and the thought of coming home to spend another two hours in front of the computer writing was horrific to me.

So the deal was that I would support her through nine years of pre-med, med school, and residency, and then when she was a full-fledged doctor, I would be able to quit my job and get nine years to become a published author. Not a bad deal, eh?

In January 2005, I left my job to crank up my writing again. I finished my second novel, The Palmyra Impact, in 18 months. Now it was 2006, time to do the agent search again. This time I was more savvy. I went to writers’ conferences like the Las Vegas Writers Conference, Thrillerfest, and the Pacific Northwest Writers Conference, and pitched my novel in person. I also queried the traditional way.

I would say my success at getting an agent to ask for a partial manuscript was approximately 1000% better when I pitched my book in person than by query letter. I would strongly advise anyone looking for an agent to pitch them in person at a conference. Putting a face to a book gets the partial through much faster than if it’s a query letter from someone the agent has never met.

At least four agents asked to see the entire manuscript of The Palmyra Impact, but no takers. They liked it, but not enough to represent it. I know I got over 50 rejections, but after you get above that, do you really need to know the exact number? Suffice to say, I queried every agent who I thought would be remotely interested. None were.

Back to the keyboard. I finished my third thriller novel, The Ark, in 2007. This time, I didn’t bother to query. I went straight to conferences to pitch it. The very first time I pitched the story was at Agentfest, a pitch session at Thrillerfest. It was the first year they’d done it, and it wasn’t the kind of pitch sessions where agents talk to a new aspiring author every five minutes.

At the 2007 Agentfest, agents only saw authors during the lunch session, and it was arranged that one agent would sit at each table. Who you were sitting with was totally random. I was talking with author Jon Land at the time, and we were late to the lunch, so we sat at the very last table in the room, which was about six miles from the front.

Being late to that lunch changed my life.

At that table was Irene Goodman, a very well-respected agent who has been in the business for 30 years. She had been representing primarily romance and non-fiction but was looking for thrillers to add to her portfolio.

When we were all seated, she went around the table and asked each writer to pitch their novels to her. Here’s the exact pitch I gave her for The Ark:
A relic from Noah’s Ark gives a religious fanatic and his followers a weapon that will let them recreate the effects of the biblical flood, and former combat engineer Tyler Locke has seven days to find the Ark and the secret hidden inside before it’s used to wipe out civilization again.

As soon as I said “Noah’s Ark”, she asked to see the first three chapters. I told her I still had some slight editing to do, but when it was ready and polished, I would send it to her. I would advise anyone pitching a novel to have a pithy one sentence summary of what your book is. If you can do that, it’s clear that you know what your story is about, which is more more attractive to an agent than a rambling five minute recounting of the plot.

During Thrillerfest and then the PNWA conference that year, I found ten more agents who wanted to read a partial of The Ark. Two months went by as I got feedback from some trusted friends and family on how to improve the book. I also got blurbs from James Rollins and Jon Land, both of whom generously agreed to read an early copy. If you want bestselling authors to give you blurbs, go to conferences and spend time with them. Again, writers’ conferences are where it’s at.

By this time, Irene (she tells me now) wondered if I had forgotten about her. I hadn’t. She was among the first agents I sent the sample chapters to. I mailed them on a Thursday in September. On the following Monday, she called me. CALLED ME! She was the first and only agent to ever call me, which made quite the impression.

She told me she loved the opening, and would I be willing to Fedex the entire manuscript to her? Uh, let me think…Yeah! I would have driven it there on a unicycle if she wanted me to.

Irene received it on Tuesday. I got a call from her on Thursday offering me representation, which was about the most amazing phone call I’ve ever gotten. I chewed it over for a day (I’d sent it to other agents who weren’t quite as quick to respond). On Friday, I accepted.

That was September 2007. It took another two years to get a publishing deal for The Ark and now we’re in negotiations to publish The Adamas Blueprint and The Palmyra Impact (I’ll put the story of how I got published in a separate blog post). But Irene believed in me, my book, and my writing career. That, my friends, is what you want in an agent: someone who is going to be just as persistent as you need to be.